The Michigan State University Comics Forum 2009 is pleaed to announce that it will be giving away door prizes to the first 5 people through the door at the David Petersen keynote on Friday evenning (March 27th).  The door prizes are generously donated by First Second Books (http://www.firstsecondbooks.com)

Ryan is not only one of the one of the event co-organizers, but he will be sitting on several panels and will have a presence in Artist’s Alley as well. For more information on Ryan’s background, be sure to check out the About section of the site or check out Ryan’s website (www.elephanteater.com).  A limited number of signed posters (whose final printed size will be 18×24) will be available free to event attendees 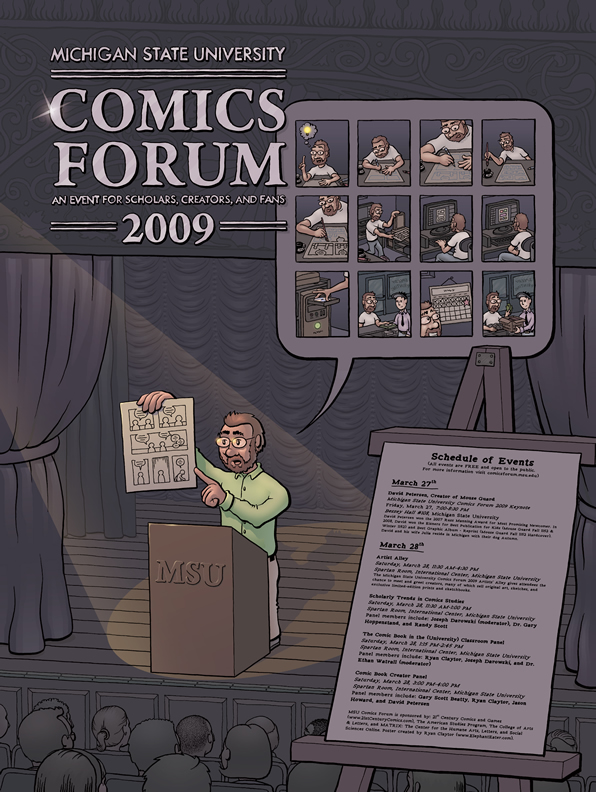 We’ve been getting some inquiries from people interested in attending the event, but unsure about the admission policy.  So, just to clarify a couple of things – the MSU Comics Forum 2009 is open to the general public (all ages) and is completely free. So, come out and enjoy yourself!

We are currently accpting questions for the Comic Creators Panel.  Questions for the entire panel or for specific panel members are welcome.  An Audio podcast of the panel will be posted shortly after the event – for those people who submitted questions but who are unable to attend in person.  Submitting a question is simply – just include it as a comment on this post.  Bes sure to include your name and location – so that we can properly give you credit for your question.

Join several Michigan comic creators as they discuss their work and their approach to the art of comic book storytelling.  The Comic Book Creator panel takes place on Saturday, March 28, from 3:00 PM-4:00 PM in the Spartan Room, International Center, Michigan State University.

Panel members will include:

Xeric Grant winner Gary Scott Beatty read his first comic book, a beat up old Tin Tin hardcover, in his grade school library some time before the ’60s Batman craze. The first alternative comic he produced (They were called “underground” then) was on his high school’s mimeograph maching, after hours, without permission. Nearly three decades later  the tools and format have changed, but Gary is still producing printed  pieces that communicate and entertain. His coloring and lettering for 3 Boys Productions’ “Students of the Unusual” has appeared since the  popular indy comic’s first issue – now his logo design graces each cover. The controversial “Wedding of Popeye and Olive” Gary colored  for Ocean Comics was discussed on Good Morning America, in “The New  York Times,” “Time” magazine and “Newsweek.” His work with nationally syndicated cartoonist Aaron Warner included coloring “Adventures of Aaron” Sunday strips, producing the “Sparky and Tim” collection cover and typography and coloring for much of Aaron’s advertising studio work. His cover coloring for Scott Rosema’s “August” are now definitive of the character. His production assistance in Omega7’s “America’s Forgotten Children” publication helped lead to the recovery of several missing children. He letters for Viper and for Kaso Comics, has written scripts for Nicky Cruz Outreach and, locally, produces a full color, monthly entertainment magazine.

His current Aazurn Publishing projects include Xeric Grant Winner “Jazz: Cool Birth,” “The One” with “Adventures of Aaron” artist Aaron Warner, “Seductions” with Oz artist Bill Bryan and “Adam Among the Gods” with James Lyle. Lengthy articles detailing every step in Aazurn Publishing’s birth are cataloged at www.aazurn.com. Gary can be found at www.garyscottbeatty.com.

Ryan Claytor is a comics artist and professor living in Lansing, Michigan. In 2007, he earned his Master of Fine Arts degree from San Diego State University with an emphasis in multimedia, researching autobiography in comics. Claytor’s achievements have included a Cartoonist in Residence position at the Cartoon Art Museum in San Francisco, California, visiting lecturerships at the Dallas Museum of Art and Michigan State University, an internship with Marvel Comics in New York City, and judging the Will Eisner Spirit of Comics Retailing Award in 2007.  In early 2009 the Cartoon Art Museum in San Francisco featured an exhibition of his work and Claytor began teaching the first “Comics and Visual Narrative” class in Michigan State University’s history.  As a creator, Claytor is most widely known for his self-published, autobiographical, comic book series And Then One Day. Although the series has undergone several format changes and incarnations since its inception in 2004, And Then One Day readers are consistently treated with Claytor’s thoughtful and entertaining personal anecdotes immaculately packaged with a designer’s eye for production detail. Most recently, in the summer of 2008, he released a republication of his Master’s Thesis on autobiography in comics entitled Concatenations. For more information about Ryan Claytor or any of his work, visit his website www.ElephantEater.com

Jason Howard is a comic book artist whose most notable work is illustrating The Astounding Wolf-Man – written by Robert Kirkman and published by Image Comics.  Jason’s website can be found at http://jasonhoward.blogspot.com

Mouse Guard creator David Petersen was born in 1977. His artistic career soon followed. A steady diet of cartoons, comics, and tree climbing fed his imagination and is what still inspires his work today. David won the 2007 Russ Manning Award for Most Promising Newcomer. In 2008, David won the Eisners for Best Publication for Kids (Mouse Guard Fall 1152 & Winter 1152) and Best Graphic Album – Reprint (Mouse Guard Fall 1152 Hardcover).  David and his wife Julia reside in Michigan with their dog Autumn. David’s website can be found at http://www.davidpetersen.net/

In order to give creators a little more time, the submission deadline for the 2009 Original Comics Collection has been changed. Instead of the 17th of March, creators now have until the 24th (before midnight) to submit their entries. If creators have questions about submitting, feel free to comment on this post or use our contact form.

David Petersen was born in 1977. His artistic career soon followed. A steady diet of cartoons, comics, and tree climbing fed his imagination and is what still inspires his work today. David won the 2007 Russ Manning Award for Most Promising Newcomer. In 2008, David won the Eisners for Best Publication for Kids (Mouse Guard Fall 1152 & Winter 1152) and Best Graphic Album – Reprint (Mouse Guard Fall 1152 Hardcover).  David and his wife Julia reside in Michigan with their dog Autumn.

Mouse Guard is the story of mice who struggle to live safely and prosper among all of the world’s harsh conditions and predators. Thus the Mouse Guard was formed. After persevering against a weasel warlord in the winter war of 1149, the territories are no longer as troubled. True, the day to day dangers exist, but no longer are the Guard soldiers, instead they are escorts, pathfinders, weather watchers, scouts and body guards for the mice who live among the territories. Many skills are necessary for the guard to keep the borders safe. They must find new safeways and paths from village to village, lead shipments of goods from one town to another and, in case of attack, guard against all evil and harm to their territories.

The Michigan State University Comics Forum 2009 is pleased to announce that it is accepting entries for the 2009 Original Comics Collection.

Ten finalists will be chosen from among the entries, from which judges will will choose a single winner who will receive a $150 award.  Entries will be judged based on their creativity, quality, and storytelling.  The work of all finalists will be displayed at the Michigan State University Comics Forum 2009 (March 27th and 28th), and be collected, archived, and preserved in the Comic Art Collection housed in Michigan State University’s Special Collections.  All genres are welcome and will be considered.

All entries must be an original, self contained story of no more than 10 pages (i.e., not the first ten pages of larger graphic novel).