A reminder that this Friday Guy Davis will be giving the keynote address for The Michigan State University Comics Forum.

The Michigan State University Comics Forum is pleased to announce that the comics exhibit at The LookOut! Gallery is now open.  “From Superman to the Small Press: The Library of Comic Shows Its Stuff” is running from Tuesday March 16-Friday March 26.  The exhibit is open to the public from 12-3 PM Monday-Friday.  In addition, on Tuesdays and Thursdays the exhibit is open from 4-6 PM, and on Wednesday it is open from 5-8 PM.  Come and see some of the earliest examples of comic art in the world.  The exhibit displays examples of pre-Golden Age comics, Golden Age superhero comics, independent and underground comics, as well as original art by Guy Davis, the keynote speaker at this year’s Comics Forum.  The Comic Art Collection is also making available stacks of comics for anybody to browse and read.  The LookOut! Gallery is located on the second floor of Snyder-Phillips Hall on the Michigan State University campus.

A self-taught artist, Michigan-based Guy Davis (b. 1966) combines storytelling and illustrative realism in a classic adventure-strip style for a myriad of genres in a 25 year professional history. From horror, urban fantasy and science fiction to period crime drama and pulp adventure, he is a designer and storyteller of a highly personal bent, as seen in his creator-owned projects such as Baker Street (Caliber Press, 1989-1991) and the recently-revived The Marquis (Caliber, 1997; Oni Press, 2000-2003; Dark Horse Comics, 2009-). It was his work on Baker Street that led him to Vertigo/DC Comics and the acclaimed pulp series Sandman Mystery Theatre (1993-1999), written by Matt Wagner and Steve Seagle.

Since then he has worked on a variety of projects including Batman: Nevermore for DC Comics, the Eisner Award-winning Fantastic Four: Unstable Molecules (2003) for Marvel Comics, The Nevermen (2000) for Dark Horse Comics and Les zombies qui ont mangé le monde (The Zombies That Ate the World, 2004-2008) for the French publisher Les Humanoïdes Associés. His other works have included illustration and conceptual design for various role-playing games and multimedia projects, including designs for the animated television pilot based on Mike Mignola’s The Amazing Screw-On Head and animated comics for both the Pan’s Labyrinth and Hellboy 2 DVDs.

Currently Guy is illustrating Mike Mignola and John Arcudi’s ongoing B.P.R.D series (work which won him a 2009 Eisner Award for Best Penciller/ Inker), along with continuing his creator owned series The Marquis for Dark Horse Comics.

You can find out more about Guy Davis at his website, The Art of Guy Davis 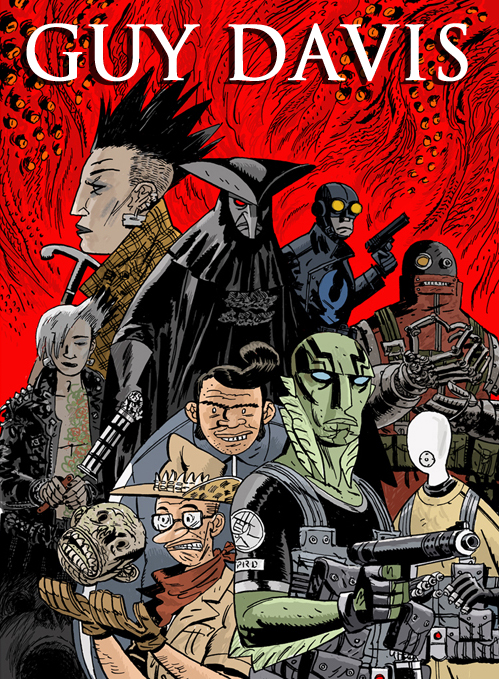 We are proud to unveil the Michigan State University Comics Forum 2009 promotion poster – designed, illustrated, lettered, inked, and colored by Ryan Claytor – one of the event co-organizers. For more information on Ryan’s background, be sure to check out the About section of the site or check out Ryan’s website (www.elephanteater.com).  A limited number of signed posters (whose final printed size will be 18×24) will be available free to event attendees 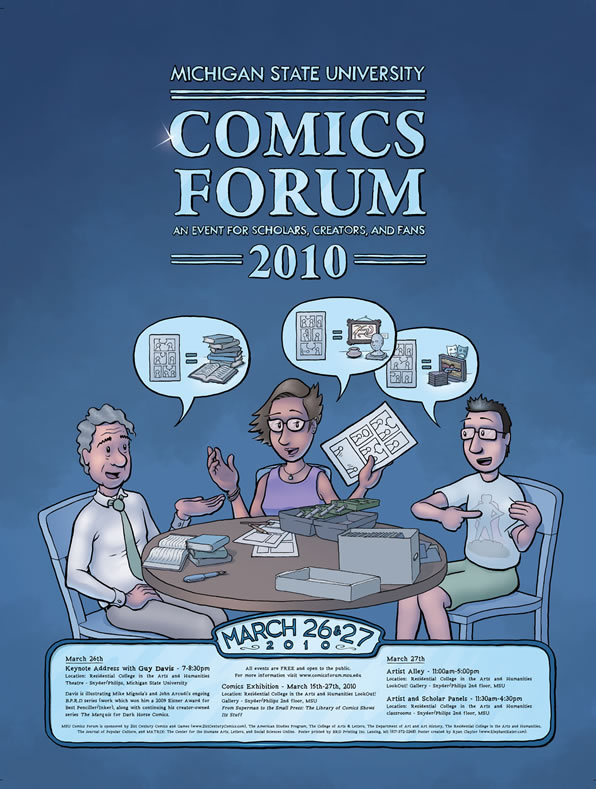 After a long wait, we are very happy to announce that we are releasing the video for the MSU Comics Forum 2009 keynote, delivered by David Petersen (http://www.davidpetersen.net/).

David Petersen was born in 1977. His artistic career soon followed. A steady diet of cartoons, comics, and tree climbing fed his imagination and is what still inspires his work today. David won the 2007 Russ Manning Award for Most Promising Newcomer. In 2008, David won the Eisners for Best Publication for Kids (Mouse Guard Fall 1152 & Winter 1152) and Best Graphic Album – Reprint (Mouse Guard Fall 1152 Hardcover). David and his wife Julia reside in Michigan with their dog Autumn.

We’re happy to announce that planning for the 2010 MSU Comics Forum is well under way.  We’ll be announcing more details shortly (including our awesome keynote speaker).  Until then, mark March 26th and 27th on your calendar – and watch the site for upcoming announcements!

For those people (near and far) who were unable to attend the MSU Comics Forum 2009, we’re happy to provide the audio from the three Saturday panels.

The Comic Book in the (University) Classroom Panel

Just ran across a liveblog of the entire Michigan State University Comics Forum 2009.  The blogger has no affiliation with the event (beyond attending), but did a really thorough and nice job, we though that its worth pointing it out.  The live blog is in three parts:

Thanks to everyone who came out to the MSU Comics Forum 2009 – a lot of fun was had by all.  For those who were not able to come, stay tuned.  We’ll be making the video of David Petersen’s keynote avialble on the site.  We’ll also be making the audio from the panels available on the site.

We’ve discovered that emails sent through our contact form are being sucked into a black hole and not actually delivered.  So, if you sent an email and never got a response, our apologies.  However, all is fixed.  Please feel absolutely free to resend your email.