The Michigan State University Comics Forum is proud to announce another set of dual keynote speakers for our 11th Anniversary event to be held on the final weekend of February 2018.

Our Creator Keynote Speaker, Lucy Knisley, is a critically acclaimed, award-winning comic creator who specializes in personal, confessional comics and travelogues. She attended The School of the Art Institute of Chicago (Merit Scholar, BFA 2007), followed by The Center for Cartoon Studies (Diamond in the Rough Scholar, MFA 2009).  To date her work has been published by several major publishers, including French Milk (2008, Touchstone/Simon & Schuster), Relish (2013, First Second [MacMillan Comics Imprint]), An Age of License (2014, Fantagraphics), Displacement (2015, Fantagraphics), and Something New: Tales from a Makeshift Bride (2016, First Second [MacMillan Comics Imprint]).

2018’s Scholar Keynote Speaker, Diana Schutz, is an award-winning editor who has been working in comics for almost forty years. She was senior executive editor at Dark Horse Comics, where she was on staff from 1990 to 2015. She was Frank Miller’s editor on Sin City and 300, Matt Wagner’s editor on Grendel, Stan Sakai’s editor on Usagi Yojimbo, Paul Chadwick’s editor on Concrete, and Larry Marder’s editor on Beanworld. She applied her knowledge of romance languages to edit international material in translation such as Blacksad and The Manara Library. She has worked with authors Michael Chabon, Neil Gaiman, Harvey Pekar, and Harlan Ellison, among others. She was fortunate to have been Will Eisner’s Dark Horse editor until his death in 2005. She is also an adjunct instructor of Comics Studies at Portland State University, a published author of both comics and prose, and the first woman to be inducted into the Canadian Comic Book Creator Hall of Fame. Semi-retired, she now works as a literary translator of European comics, including work by Moebius, Manara, Muñoz & Sampayo, and more.

The Michigan State University Comics Forum seeks proposals for presentations, which may include but are not limited to:

Submissions from a broad range of disciplines are encouraged; however, presentations must be focused on the medium of comics. The MSU Comics Forum is seeking a multitude of perspectives that represent the diversity of comics and the medium’s social, literary, artistic, and theoretical contexts.

Due to the visual nature of the comics medium and diverse community engagement in the Forum, we ask that all presentations integrate visual content.  Panel presentations should be .ppt, slides, .pdf, or .presi, and on USB or accessible online

Please submit proposals to the 2018 MSU Comics Forum Panel Coordinator, Zack Kruse, at: msucfpanels@gmail.comPresenters will be notified of acceptance by December 22, 2017.

Due to limited space the Artist Alley is juried and not all requests will be met. Once the application is received it will be reviewed and you will be notified via e-mail by Friday, Dec. 22nd, 2017 as to whether or not we are able to meet your request.  Accepted Artists will receive table space free of charge.

Tune into or download Episode #3 of the MSU Comic Art and Graphic Novel podcast to find out who will be our keynote speaker at this coming year’s event. Episode release date, Nov. 1st, 2016 at http://msucomics.libsyn.com. 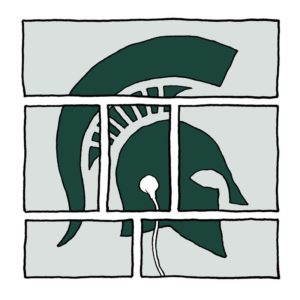 This year’s MSU Comics Forum Artists Alley will be taking place on Saturday, Feb. 25th, 2017. It will be in the Lookout! Gallery and surrounding classrooms located on the 2nd floor of the Residential College in the Arts and Humanities in Michigan State University’s Snyder/Phillips Hall in East Lansing, MI. There is no cost to request table space for the MSU Comics Forum.

To request table space complete the requested information at the following form by Tuesday, December 20th, 2016:

Due to limited space the Artist Alley is juried and not all requests will be met. Once the application is received it will be reviewed and you will be notified via e-mail by Saturday, January 7th, 2017 as to whether or not we are able to meet your request.  Accepted Artists will receive table space free of charge

The MSU Comics Forum will be accepting submissions for individual presentations, panel sessions, and roundtables as part of the event?s academic panel discussions on Saturday, Feb 25th, 2017.  Submissions will be accepted from a variety of disciplines and must be received by Dec. 20th, 2016 at 11:59pm EST.  Download PDF file for details:

Many thanks to everyone who attended, sponsored, organized, and participated in the 9th annual Michigan State University Comics Forum
(MSUCF) and made it such a successful event.  We’ll see you again next year for the 10th annual MSUCF.  In the meantime, please enjoy the archive of Sergio Aragones’ keynote speech.

We are pleased to announce that the 2016 MSU Comics Forum Keynote Speech by Sergio Aragones will be liveStreamed.

It is my pleasure to formally unveil the 2016 Michigan State University Comics Forum poster illustrated by this year’s keynote speaker, Sergio Aragones. 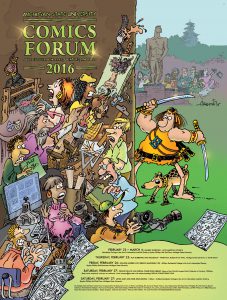 Sergio’s keynote address will place on Friday, February 26th from 7-8:30 in the Residential College of Arts & Humanities Theater.

Feel free to repost this electronic image to help us promote the many events surrounding this year’s MSU Comics Forum. If you are a business owner or manager and would like to receive a few posters to hang in your place of business, please contact me (Ryan Claytor, MSU Comics Forum Director at rclaytor@msu.edu) by Friday, Jan. 22nd, 2016 to be added to our mailing list. 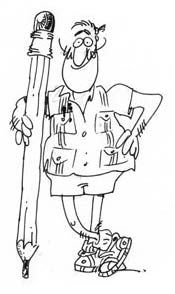 The 2016 MSU Comics Forum will take place on Feb. 26th and 27th. The keynote address will occur on the first evening, Friday, Feb. 26th, 2016, while the panel discussions and artist alley will take place the following day, Saturday, Feb 27th, 2016. The location will be in Snyder/Phillips Hall on the campus of Michigan State University.

This year, the Forum is proud to announce that Sergio Aragones will be
our Guest of Honor and Keynote Speaker on Friday, Feb 26th, 2016.
Aragones is the most honored cartoonist, having won every major award in the field including the National Cartoonists Society’s Reuben Award and the Will Eisner Hall of Fame Award.  He is widely known for his contributions to Mad Magazine and his long-running comic book series, Groo the Wanderer.  Recently, Aragones completed a Groo vs. Conan crossover with artist, Tom Yeates, and continues his more than 50 years of contributions to Mad Magazine.