As our main events approach, we wanted to make a brief announcement that our Location Page has been updated with parking information that might prove helpful when visiting campus.

See you at the end of the month,
Ryan Claytor
MSU Comics Forum – Director

Our first presentation of the 2018 MSU Comics Forum took place on the first of the month and is now available for viewing online:

Audio improves around the 5:30 mark.  Thanks to Zack Kruse for an informed and engaging lecture.

If you’re unable to attend the 2018 MSU Comics Forum, each of our keynote speakers’ presentations will be liveStreamed at:

And here are the times that you’ll be able to watch (remember, times are in Eastern Standard Timezone):

The 2018 MSU Comics Forum schedule featuring our Keynote Speakers, Artist Alley participants, Panel Discusions, and more are completely up-to-date for this year’s event, all of which take place at various times, days and locations surrounding the final weekend of February.  We’ve tried to top ourselves in terms of programming yet again, so I hope you’ll take a moment to familiarize yourself with our keynote speakers and event line-up.

Finally, I’d like to make a brief mention that our venue has changed to the MSU Library and as usual all events are free and open to the public.

Our posters list the location for the Penelope Bagieu signing as:

Unfortunately Schuler Books – Eastwood recently announced that they will be closing.  However, Schuler Books – Okemos will remain in operation and will be the new host for the signing.  Here is their address:

Despite a location change, the signing will still take place on March 9th, 2018 at 7pm.  Sorry for any inconvenience this may have caused.  We look forward to seeing you in Okemos.

Inspiring Young Minds: Comics, Cartoons, and Other Graphic Forms of the 60s and 70s
Join our own Comics Forum Panel Coordinator, Zack Kruse, to uncover some of the comics that influenced Michigan Stories artists Mike Kelley and Jim Shaw throughout their lives, from their early adolescence to their most recent projects.

The MSU Comics Forum is excited to announce that the rosters for our Artist Alley and Panel Discussions are now posted on their respective pages.

Many thanks to the increasing number of applicants to this year’s event.  Each of you have continued to allow the MSU Comics Forum to grow and hone our mission of inclusivity and professionalism.  We look forward to presenting our eleventh year of high caliber programming at the end of February 2018 in our new location, the Michigan State University Main Library. 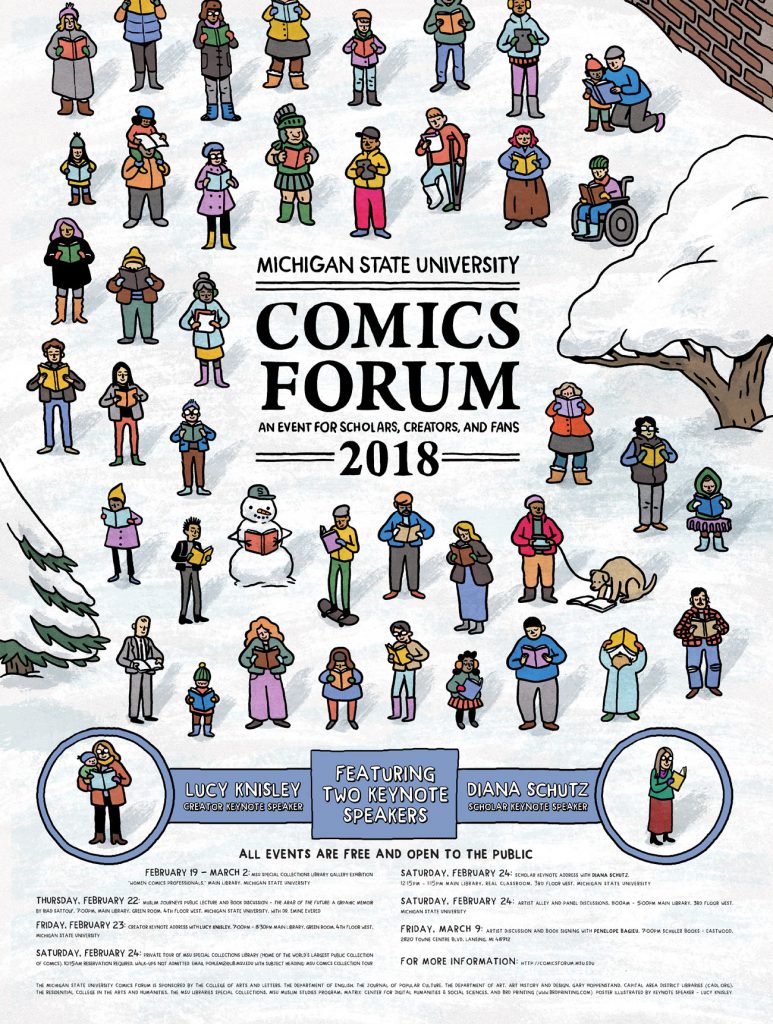 The 2018 Comics Forum poster and schedule of events were proudly unveiled via the Michigan State University Comic Art and Graphic Novel Podcast earlier this morning.  Our Creator Keynote Speaker, Lucy Knisley, illustrated the image you see above, which will be printed as 18″x24″ posters in advance of the event.  If you are a business or school who is interested in helping us promote the MSU Comics Forum by hanging these in a public location, please contact MSU Comics Forum Director, Ryan Claytor, via the CONTACT page of this website and we will send several free of charge.

The Michigan State University Comics Forum is proud to announce another set of dual keynote speakers for our 11th Anniversary event to be held on the final weekend of February 2018.

Our Creator Keynote Speaker, Lucy Knisley, is a critically acclaimed, award-winning comic creator who specializes in personal, confessional comics and travelogues. She attended The School of the Art Institute of Chicago (Merit Scholar, BFA 2007), followed by The Center for Cartoon Studies (Diamond in the Rough Scholar, MFA 2009).  To date her work has been published by several major publishers, including French Milk (2008, Touchstone/Simon & Schuster), Relish (2013, First Second [MacMillan Comics Imprint]), An Age of License (2014, Fantagraphics), Displacement (2015, Fantagraphics), and Something New: Tales from a Makeshift Bride (2016, First Second [MacMillan Comics Imprint]).

2018’s Scholar Keynote Speaker, Diana Schutz, is an award-winning editor who has been working in comics for almost forty years. She was senior executive editor at Dark Horse Comics, where she was on staff from 1990 to 2015. She was Frank Miller’s editor on Sin City and 300, Matt Wagner’s editor on Grendel, Stan Sakai’s editor on Usagi Yojimbo, Paul Chadwick’s editor on Concrete, and Larry Marder’s editor on Beanworld. She applied her knowledge of romance languages to edit international material in translation such as Blacksad and The Manara Library. She has worked with authors Michael Chabon, Neil Gaiman, Harvey Pekar, and Harlan Ellison, among others. She was fortunate to have been Will Eisner’s Dark Horse editor until his death in 2005. She is also an adjunct instructor of Comics Studies at Portland State University, a published author of both comics and prose, and the first woman to be inducted into the Canadian Comic Book Creator Hall of Fame. Semi-retired, she now works as a literary translator of European comics, including work by Moebius, Manara, Muñoz & Sampayo, and more.

The Michigan State University Comics Forum seeks proposals for presentations, which may include but are not limited to:

Submissions from a broad range of disciplines are encouraged; however, presentations must be focused on the medium of comics. The MSU Comics Forum is seeking a multitude of perspectives that represent the diversity of comics and the medium’s social, literary, artistic, and theoretical contexts.

Due to the visual nature of the comics medium and diverse community engagement in the Forum, we ask that all presentations integrate visual content.  Panel presentations should be .ppt, slides, .pdf, or .presi, and on USB or accessible online

Please submit proposals to the 2018 MSU Comics Forum Panel Coordinator, Zack Kruse, at: msucfpanels@gmail.comPresenters will be notified of acceptance by December 22, 2017.